5 projects we didn’t do (after an MVP)

At Thorgate, we’ve always stressed on the importance of starting any digital product with an MVP workshop (or a lean requirements workshop). We constantly explain that the best way to build any phenomenal product is to start lean. The main reason for this is obviously the money, especially in the current post COVID-19 economy, the agile process of starting with an MVP keeps your money safe and spent in the right ways.

An MVP workshop makes the process of product development iterative and helps us and our clients understand what exactly we should build. Read in detail about why an MVP workshop is important here.

At Thorgate, here’s an example of five MVP workshops that we did, which helped us understand that we would not be doing the project itself due to many reasons such as lack of clarity, value or need.

HealX is a UK based AI platform for rare diseases. It makes drug discovery faster, smarter and safer, and supports our team and partners in discovering and translating new treatments towards the clinic. When working with HealX, we agreed that instead of rushing into development, we’d ensure that the soon-to-be developed solution actually meets the requirements from both the client and the end-users. So we started from scratch with a lean requirements workshop.

Our first goal after that was to create a clickable prototype for vested parties to understand if such a platform would indeed add value in the existing rare disease research process. Through the clickable prototype, we created a solution that was user-friendly, had a great interface, and was able to move the process from excel sheets and joint messaging boards to a common platform. Now, armed with a visual interface of the final solution, the client was actually able to showcase the platform to the end-users before a single line of code was actually written. Through detailed meetups, discussions and reviews, the client was able to verify on the actual end-users that the problems they aimed to solve could not be addressed by the platform they had planned to develop.

As an end result, the prototype that Thorgate created helped HealX verify that the planned big project would not be worth the time and money that was planned to be invested there, at least not at this time. This saved them hundreds of thousands of Euros that they were able to direct elsewhere to further enhance the rare disease research rather than on something that would not have provided them with the ROI they were looking for at that time.

For us, it was a matter of trust. We would always choose to not do a project that fails to bring value to the client, instead of focusing on the product that sees no good end. 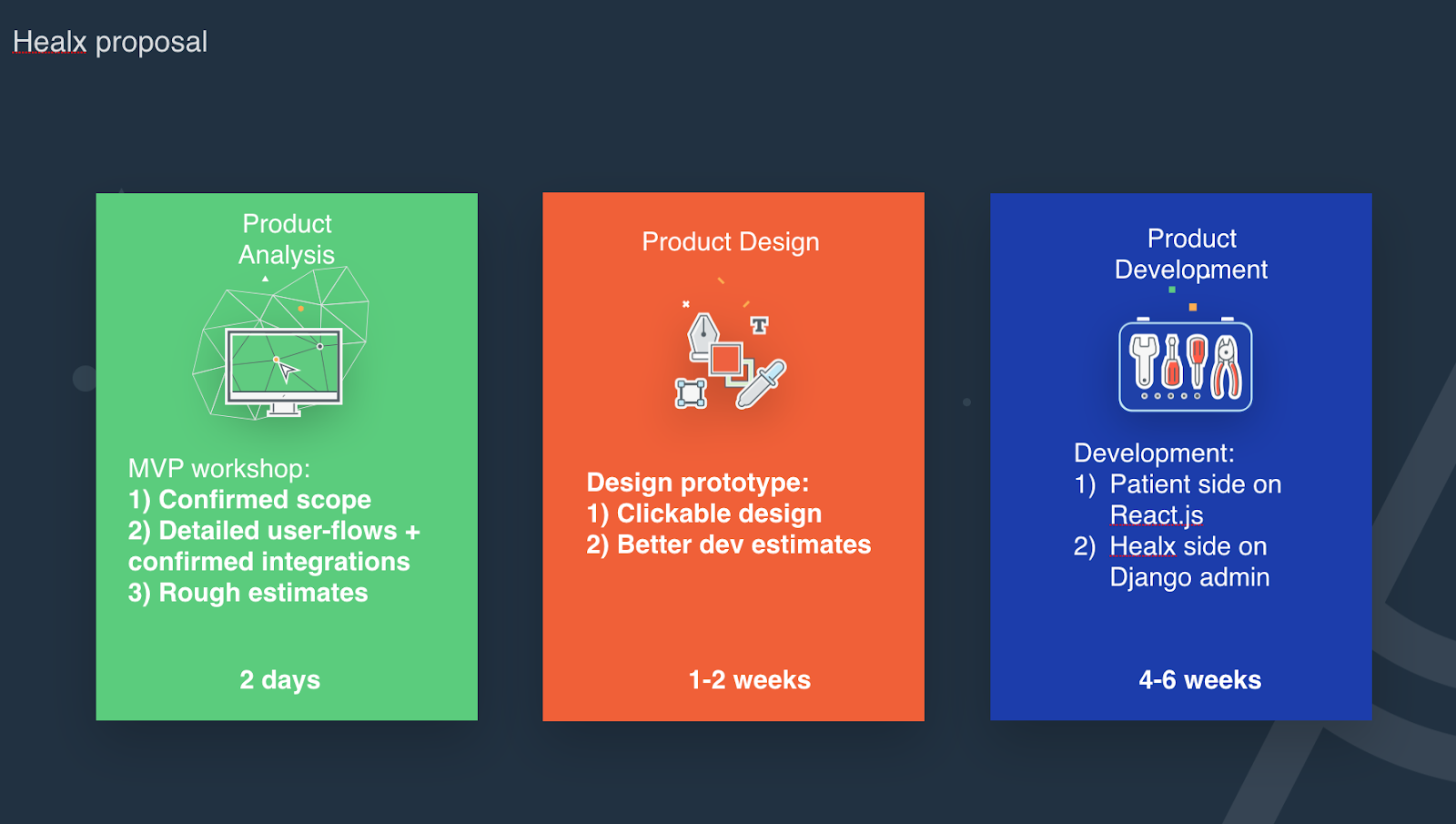 Film It is a Canadian company with the goal of creating a global, independently sustainable filmmaking community and market. They wanted to create with us an app to educate, facilitate and appreciate the art of making films by connecting the world through film.

The app was planned to be a social networking, project management & content creation platform for filmmakers. They had already started development before approaching us and were trying to build the whole project altogether. We explained to them that some projects start big and then fail harder just because they don’t go through a lean iterative process.

The client also wanted this to be a blockchain based project, which was not the need for the project at the initial stage in our eyes. However, since blockchain or decentralisation was not the core feature of this idea anyway, we did the MVP scoping for them without it. After multiple ideation/brainstorming sessions we invited them into our office in Tallinn for an MVP workshop.

After a successful MVP workshop and many meetings for analysis and scoping, we were actually able to help rethink their entire product development and idea so they could save both money and time.

A Slovakian veterinary company approached Thorgate to build a platform for veterinary doctors to handle meetings, case files and other storage of pets’ information.

As usual, we suggested an MVP workshop and analysis to kick-off the product development process, so we could understand what core features need to be built first. However, the client insisted that all features should be included from the first stage of development, and the scope of the project could not be reduced or made lean. Therefore, using all their required features we did a preliminary design with a clickable prototype. Just like HealX we did realise before writing any code that this product doesn’t serve the needs of the end-user as planned.

Given the risk in developing such a huge product without any iterations and making requirements lean, we did not go forward with the platform development. We realised that this kind of product development requires a huge amount of investment with a big chance of failing, and this is not how we work at Thorgate.

This was a very vague product idea presented to us to create a portal with extreme sport challenges. We did some ideation and an MVP scoping to help understand product features, and align requirements with end user needs. However, this analysis helped both us and the client understand that this product was not able to create desired revenue and the idea either needed refinement or more clarity.

A production company asked us to build for them an AI solution which would allow them to increase production quality. We actually provided them with the physical device to hold their product in place on the production line. The budget they provided us to build this product was 250,000 euros. However, just from our initial analysis, ideation and product scoping, we were able to help them achieve their goal with 250€ only,

At Thorgate, we like to use the Pareto principle when describing MVP; it is that every product gets 80% of its required feedback or user satisfaction from 20% of its features. Our goal is always to help the client bring that 20% of the product live first and help them fail or succeed faster. There’s no point in going all in when developing a product before you have some tangible data and proof to justify your idea. That would be like marrying your beloved right after meeting them. It’s smarter to date, start living together and then see how good the match is.

There’s one main reason we suggest to our clients to make an MVP first: it’s all about testing the idea while keeping the expenses as low as possible. Usually, everyone has a limited budget to invest in designing and developing the product.

Therefore, it’s always smarter to make an MVP first before you marry your idea.

Besides these 5 projects that we never actualized thanks to the initial scoping and MVP workshops, we’ve helped many clients save their money by helping them rethink their idea or reconsider the entire product after an initial scoping.

If you have a product idea and you would like to get initial consultation and analysis to be sure you’re on the right path, feel free to contact Thorgate.

Get a one hour free product consultation to make you ready for efficient development. Book a meeting here.

How can a start-up get faster in product development?

Should you build, buy or customize a digital product?